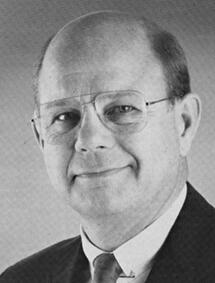 Allen I. Olson won election to North Dakota’s highest office in 1980, following eight years of service as the state’s attorney general. The Republican had also served as assistant director of the North Dakota Legislative Council from 1967-1969.

Born in Rolla, Olson earned degrees in business and public administration and law at the university of North Dakota, and completed a graduate course in military law at the University of Virginia School of Law. While serving in the U.S. Army, he had extensive military legal experience while on assignment at the Pentagon and in Germany.

During his time as governor, Olson served as chair- man of the Legal Committees of the National Governors Association and the Interstate Oil Compact Commission. He presided over the NGA’s participation in the creation of a National Advocacy Center to assist state and local governments in reviewing and preparing for federal appellate litigation, and chaired and lectured at 10CC meetings on pertinent oil and gas issues of importance to member states.

After leaving office, Olson and his family moved to Minneapolis, where he returned to a private law practice. Since 1988, he has been executive vice president of the Independent Bankers of Minnesota. Olson was inducted into the Scandinavian-American Hall of Fame in 1989.

Allen and Barbara Olson are parents of three children: Kristen, Robin and Craig.